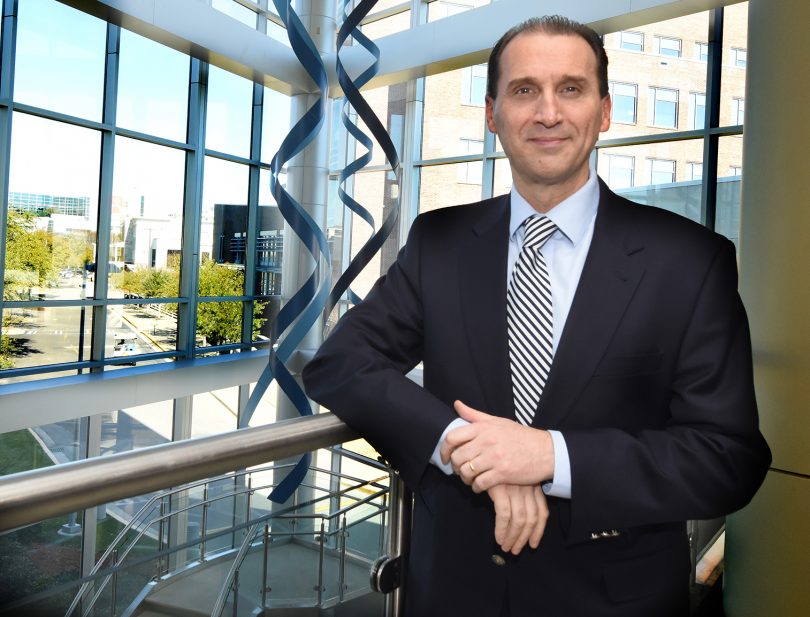 Christmas Eve 2001: A 2-year-old boy named Nicolas suddenly became very ill. His family rushed him to the hospital, where he underwent a number of tests, one of which was an MRI. While the little boy, affectionately called “Nico,” lay peacefully asleep in the scanner, his father, Daniel, wandered over to the technician.

“Why did you download someone else’s scan?” Daniel inquired.

The technician, whose face suddenly became as white as winter snow, looked at Daniel and painfully broke the news:

Daniel, a surgical oncologist, knew exactly what he was looking at. Cancer. Ependymoma, a rare form of brain cancer, to be exact.

And “Daniel” was Dr. Daniel Albo, who’s now the director of the cancer service line at the Georgia Cancer Center at Augusta University.

This news came when he was completing a surgical oncology fellowship at the University of Texas MD Anderson Cancer Center in Houston. When Albo couldn’t find one facility that offered everything Nico needed, Albo started fragmenting his son’s care — different hospitals in different cities. In 2002, when Albo finished his fellowship, the family moved to Augusta, Georgia, for his first job as a surgical oncologist.

In 2004, Nico’s disease progressed, which led the family back to Houston for a clinical trial. After they did everything they could to add years to his life and life to his years, in 2005, Nico was set free from his suffering. Little did the Albo family know, their son’s short life would make a tremendous impact on cancer care for future patients.

The family remained in Houston until 2015, until Albo heard — and acted on — his calling to come back to the Georgia Cancer Center to lead the cancer service line.

Through not just Nico’s, but also the family’s five-year battle with cancer, which included multiple surgeries, Gamma Knife and radiation treatments, Albo and his wife, Luisa, served as his son’s physical and speech therapist, nurse and, most importantly, his advocate. You name it, they did it all. While they did so out of love, of course, he also did so out of necessity, as the hospital where Nico received treatment fell short in a number of ways.

“He lived a good life, because we were able to navigate his care for him,” Albo said. “Not everyone has that, and you shouldn’t have to be the son of a surgical oncologist to benefit from it.”

It was this very thought that inspired Albo to help design the Georgia Cancer Center service line as it exists today.

In cancer care, the single most difficult but important thing is for all of the pieces of the puzzle to be in the right place at the right time; and it’s the role of a cancer center to provide instructions for putting the puzzle together. The Georgia Cancer Center does just that through a cancer service line model, which Albo refers to as “a protective cocoon surrounding patients.”

Patients are integrated into one comprehensive, multidisciplinary program, with the goal being to follow them through the continuum of care until they’re cured of the disease. The program offers all treatments for all forms of cancer and includes every type of specialist and supportive care that a cancer patient may need during his or her course of treatment.

“Cancer centers are more than just brick, mortar and glass,” Albo said. “They’re about the people, and our physicians, nurses and administrative personnel see themselves as part of a team versus as individuals. We bring these teams and the system directly to the patient.”

This keeps the patient from having to navigate through different physicians, appointments, locations, etc., and, ultimately, get to the right place at the right time for the best outcome possible. For instance, the patient sees the medical, radiation and surgical oncologist in clinic at the same time and in the same place, and all appointments take place in the outpatient cancer center. This is imperative, because cancer involves a specific window and sequence when treatment is effective.

In addition to ensuring the best outcome possible, this multidisciplinary model also enhances the patient experience.

“Cancer is debilitating physically, emotionally and spiritually,” Albo said. “Navigating the complexity of cancer care without help is nearly impossible.”

That’s why the Georgia Cancer Center offers nurse navigators who communicate with patients and physicians and ensure a smooth transition between inpatient and outpatient.

“Cancer has long-lasting effects on people’s lives,” Albo said. “It leaves a scar, but the size and the depth of the scar is determined by us. It’s on us as a community of caregivers. We really hate cancer — we really do — because we know what it does to people’s lives.”

Albo knows all too well.

“As much as I like to think that I would’ve come to this conclusion on my own, the idea arose in Nico’s case,” Albo said. “He’s one of the most amazing souls I’ve ever met. He was our teacher — we learned from him. He’s the reason I do what I do and why this model exists today.”

To learn about our cancer specialists and services like minimally invasive surgery and clinical trials visit augustahealth.org/cancer, or call us at 706-721-6744.