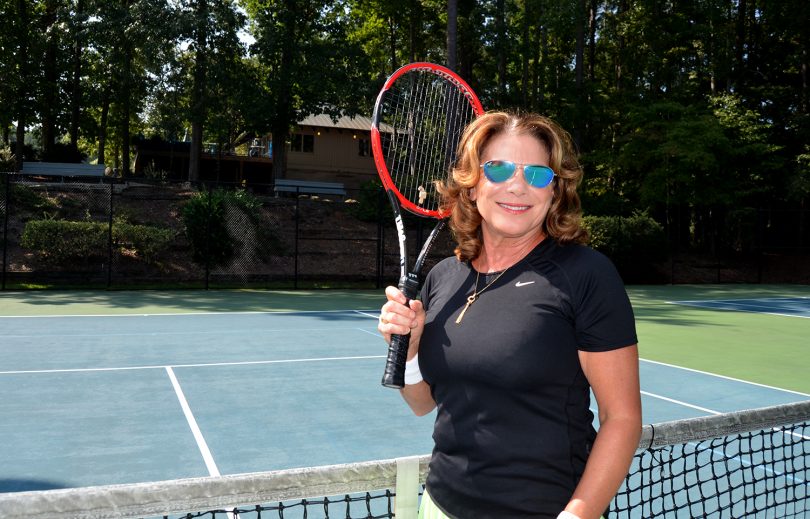 A tennis player with a passion for helping her community helped bring in over $100,000 for the Georgia Cancer Center. It’s a partnership that started when a family member learned she had cancer.

“My daughter-in-law’s sister was diagnosed in the early 2000s,” said Brenda Jennings, creator of the Cancer Awareness Tennis Tournament in Columbia County. “Watching her family, friends and the entire city wrap their arms around her to raise money for her medical bills inspired me to help people in my community.”

While it took Jennings about five years to realize her fundraising opportunity, she had just six weeks to make it happen. That was 2011 and when it was all said and done, Jennings presented a check to the Georgia Cancer Center for over $10,000.

“I wanted the money to stay local,” she said. “I researched different organizations and was blown away by all the things happening here. I really loved the idea of treating the entire patient, instead of just treating their cancer.”

Jennings said she got a lot of positive feedback from players entering the tournament.

“Not only could the people playing in the tournament benefit if they were diagnosed with cancer, but their family and friends could also receive support and service from the Georgia Cancer Center,” she said.

On, August 27 of 2012, Jennings incorporated The CSRA Tennis C.A.T., Inc., with a public charity status. Having a 501(c)(3) status allowed them to raise more funds for the cancer center. The money raised was split between two areas of the Georgia Cancer Center. Part of the money went to The Image Boutique, and the rest was gifted to the music therapy program.

“I remember talking with the director of the Georgia Cancer Center during one of our first meetings,” Jennings said. “He told me that when cancer patients hurt, the pain is so deep that music can be an opportunity to forget about that hurt for just the briefest of moments.”

For Jennings, organizing the C.A.T. Tournament was a team effort.

“I could never have done this by myself,” she said. “I needed the tennis community, including Craig and Gail Jones, the owners of Petersburg Racquet Club, along with local business owners making donations and volunteers giving their time to make the tournament a success for seven years.”

At the Georgia Cancer Center, we live our mission every day: to reduce the burden of cancer in the State of Georgia and across the globe through superior care, innovation, and education. Please join us as a catalyst for change by supporting your Georgia Cancer Center at Augusta University. Give today.

There has been a problem with your Instagram Feed.