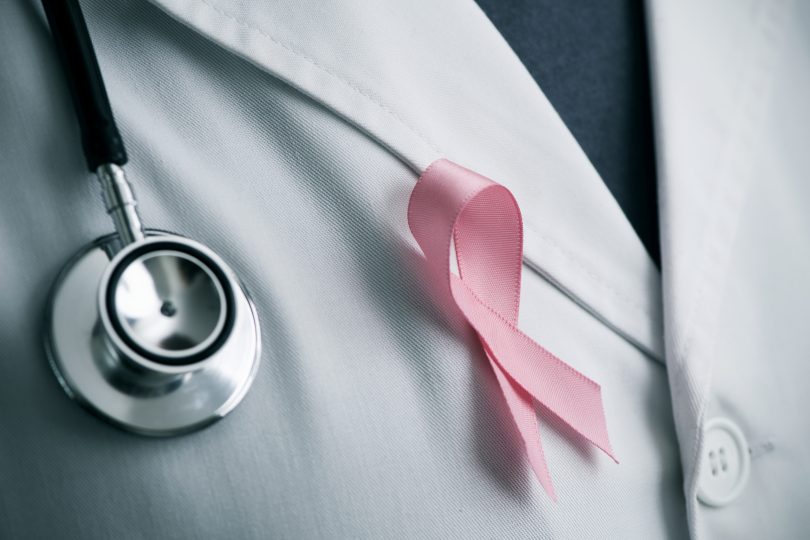 More than nearly any other, breast cancer is a particularly feminine cancer.

Pink, after all, is the color that represents the disease.

But a small number of men can also develop breast cancer. About 1 in 800 men will have breast cancer in their lifetime, compared to 1 in 8 women, according to the American Cancer Society.

Another key difference? In men, breast cancer tends to be diagnosed when it’s at a later stage. Unfortunately, that means that men can have a higher death rate from breast cancer than women, “primarily because awareness among men is less and they are less likely to assume a lump is breast cancer, which can cause a delay in seeking treatment,” said the National Breast Cancer Foundation.

One thing people often say about cancer is that it doesn’t discriminate—and that goes for breast cancer too. “While the risk for breast cancer in men is extremely low, it’s still something they should be generally aware of,” said Dr. Alicia Vinyard, a surgical oncologist at the Georgia Cancer Center.

A little about anatomy

Dwayne “The Rock” Johnson laughingly told a story on Instagram about how his young daughter told him she liked his “brown boobies.” “Thank you baby,” he said, “but daddy has pecs, not boobies.”

Women’s breasts include lobules, where breast milk is designed to be produced and stored, as well as ducts, which carry the milk to the nipple. Men’s breast tissue contains only ducts, which are located right behind the nipple. “This means that unlike women, men can’t have lobular cancer,” said Vinyard.“Therefore, breast cancer in men is usually invasive ductal cancer.”

In men, breast cancer commonly shows up as a firm lump just behind the areola since this is where the ductal tissue resides. A cancerous lump within the breast can also be related to other disease processes. “More likely if a mass is found in other locations within the breast and not behind the nipple, it could be a cancer from elsewhere in the body, such as a lymphoma,” said Vinyard.

If men notice a lump that wasn’t there before, they should go immediately to a doctor to have it checked out. While it could be a simple cyst or infection, it’s better to let a doctor make that diagnosis. “Don’t assume it’s nothing, and let it go,” said Vinyard, “Especially since a breast cancer can be painless and can continue to grow and possibly even spread.” Survival of early breast cancer approaches 98 percent, so early diagnosis is key for initiating treatment.

So there’s a lump—what’s next?

If men do find a lump under a nipple, the first step is to visit their physician, who will likely schedule a mammogram and ultrasound to confirm the diagnosis. A mammogram uses a special machine with two plastic plates to flatten the breast for a clear picture of the tissue, while an ultrasound involves a painless probe that uses sound waves to evaluate breast lumps.

A biopsy—which removes tissue and/or fluid from the lump for examination under a microscope—and surgery will usually follow, which may include reconstruction of the nipple. Just as in women, if cancer is found early, surgery could be the only treatment needed, but cancer that’s found later could mean chemotherapy and radiation too, in order to make sure all cancer cells are treated and reduce the risk of the cancer coming back.

Some men, however, should be a little more concerned about their risk for breast cancer. Most people may have heard of the BRCA2 gene, which is designed to suppress tumors. But inherited mutations in that gene can increase risk of cancers, including breast cancer.

If women in a family have tested positive for a mutation in the BRCA2 gene, men should undergo genetic testing. If they test positive, it’s a good idea for them to see a physician once a year for a physical exam, just as a precaution. “However, it’s important to note that even though it is associated with male breast cancer, the lifetime risk in those men is still not high,” said Vinyard. “So unlike in women, we don’t recommend prophylactic mastectomies in men.”

Other general lifestyle factors like smoking and obesity can also increase the risk of breast cancer and many other cancers, so for your overall health, you know the drill: Quit tobacco, eat a healthy diet and exercise.

Vinyard has personally treated only four men with breast cancer so far in her career. However, while she can imagine there would generally be some degree of embarrassment for men in having a predominantly female cancer—“although men know they have breasts, men don’t admit they have breasts. They have a chest”—it’s important for them to be aware that it can happen.

“Just take a moment to do a simple exam of your own body,” she said. “If you notice a lump that wasn’t there, bring it to a physician’s attention. Then you can go from there.”

Our team of specially-trained cancer providers is skilled in the care of your unique diagnosis. Our teams work together to collaborate and determine a personalized treatment plan for your individual needs. Visit augustahealth.org/cancer or call 888-365-0747.