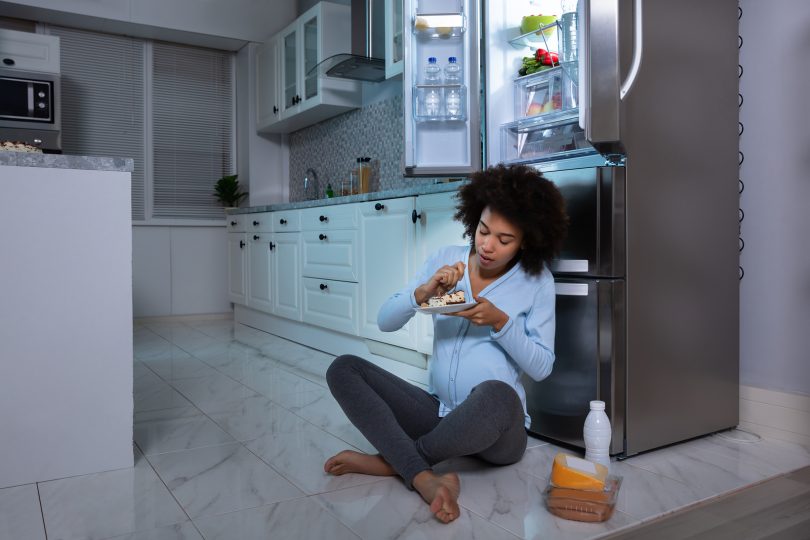 Pregnant women get advice from pretty much everyone they see. The number-one advice? What they should eat.

So what should really be on your plate? We talked to Dr. Manish Jain, an obstetrician/gynecologist at Augusta University Health to bust some pregnancy food myths and give you the real food facts.

Myth No. 1: Eat anything you want!

Fact: Yes, you’re eating for two, but pregnancy’s really not the time to approach every single meal like an all-you-can-eat buffet where dessert’s the main course. According to the Academy of Nutrition and Dietetics, during the first trimester, you don’t need to eat extra calories. In the second trimester, you should add about 340 more calories a day, and the in the third trimester, the recommendation is an additional 450 calories.

These calories, said Jain, should come from whole grains, lean proteins or legumes (beans), vegetables and fruits, and dairy products. “During pregnancy, you want higher calcium,” he said. “And pregnancy is notorious for constipation, so increasing the fiber in the diet through more fruits and vegetables can really help with that. Finally, water—you want to drink a lot of water throughout your pregnancy.”

Myth No. 2: You shouldn’t eat fish—and definitely not sushi.

Fact: That myth came about since certain fish is high in mercury, which is definitely a no-no during pregnancy—and for anyone else as well. Since most of us don’t eat fish most days a week, it’s not that much of an issue. Fish are also high in omega 3 fatty acids, which are very good for your child’s brain health. The best approach is to enjoy no more than two servings a week and choose varieties low in mercury, such as tilapia, catfish or salmon.

Raw sushi could be a concern since there’s always the risk of bacteria that could lead to problems for you and your baby—but, as Jain points out, “Japanese women eat a lot of fish and sushi, and studies haven’t found an increased risk of problems in pregnancy.”

So if you enjoy sushi, maybe eat in moderation—and focus on cooked sushi. But a salmon nigiri here and there should be fine.

Myth No. 4: Don’t visit the deli counter or have a hot dog.

Fact: While there’s a slight risk of listeria contamination in deli meats and hot dogs, the most recent listeria outbreak didn’t happen because of these foods—it was related to vegetables, said Jain. “So if you have an occasional turkey sandwich or hot dog, I wouldn’t say it’s going to be detrimental,” he said. In addition, most experts advise making sure hot dogs or deli meats are cooked to steaming before eating to further reduce risk.

Myth No. 5: Can that caffeine-rich coffee.

Fact: It’s recommended that patients have no more than 200 milligrams of caffeine a day. To help serve as a guide, consider that a typical 8-ounce coffee has about 100 milligrams, 8 ounces of black tea has 50 to 60 milligrams and a 1-ounce shot of espresso has about 50 milligrams. If soda’s more your speed, there are several varieties that are caffeine-free. However, that’s not your golden ticket to drink as much as you please. Soda is also high in sugar and chemicals. If you’re thirsty, water is still the best drink for you to have while you’re pregnant.

Myth No. 6: A small glass of wine—or a puff or two from a cigarette or e-cig—is fine now and then.

Fact: “We just don’t know that’s the case,” said Jain. So for safety’s sake, experts say that no amount of alcohol is safe during pregnancy. The same goes for smoking, secondhand smoke and even vaping.

While it’s not exactly food-related, Jane also says that many pregnant moms ask him whether it’s really safe to exercise during pregnancy. “If it’s something you usually do, we say it’s fine,” he said. “Even if you weren’t exercising before, as long as you start out slow, it’s perfectly fine.”

Just take note if your exercise makes you feel dizzy, nauseous or uncomfortable, and stop if that’s the case.

Moms also ask if it’s OK to color hair during pregnancy (that’s a yes). Another common question is, “Is it OK to lift my arms over my head?”—because of an old wives’ tale that suggests risk of tangling the cord around the baby’s neck. That’s OK too.

But Jain also points out, “If you’re worried at all—if you have any fear—it’s certainly OK to eliminate certain foods or other activities until after you deliver your baby. But we do want to encourage women who are pregnant to continue to stay active–it will increase their energy levels, help them feel better and help them during delivery too.”

Augusta University Health is proud to initiate the first 24/7 Obstetrics Emergency Department (OB ED) in Augusta, Ga. that is dedicated to treating unexpected pregnancy and post-delivery issues for pregnant women 20 weeks gestation and greater and postpartum women who delivered within 6 weeks. Learn more here or call 706-721-2688.

To find an OBGYN or schedule an appointment at Augusta University Women’s Health, visit augustahealth.org/women or call 706-721-4959.