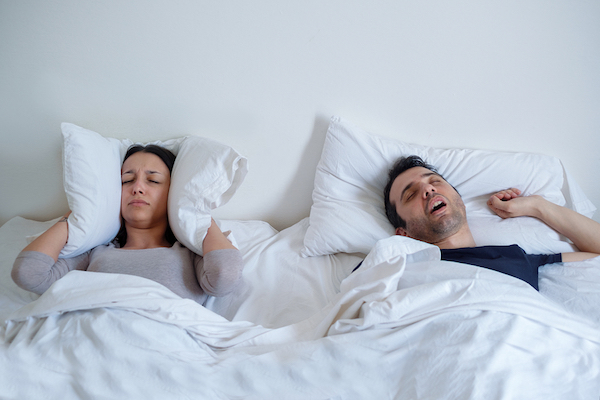 Is It Just Snoring? Or Is It Sleep Apnea?

Say you snore and regularly wake up tired and with a headache.

It could be allergies, it could be the wrong type of pillow—but it could also be obstructive sleep apnea.

“Most people with sleep apnea aren’t aware they have it,” said Dr. Camilo Reyes-Gelves, an otolaryngologist and head and heck surgeon at Augusta University Health. “But if you ask their wife or partner if they ever stop breathing and wake up gasping and choking multiple times at night, they often say yes.”

Obstructive sleep apnea happens when your airway relaxes too much and gets smaller or closes while you’re sleeping. That leads to snoring—but it can also make you stop breathing in your sleep, repeatedly throughout the night. There are lots of causes of sleep apnea, but the most common are being overweight or obese, having chronic nasal congestion or asthma, or having diseases like high blood pressure and diabetes. The anatomy of your upper airway can also play a role.

Anyone who doesn’t sleep well can tell you how much that lack of sleep affects how they feel every day, how they do their jobs, and how they interact with friends and family.

The scary part of sleep apnea is that it also can increase your risk of stroke, hypertension and pulmonary hypertension, which can lead to heart failure. The problem is when someone with sleep apnea repeatedly stops breathing: “When you don’t get oxygen because you stopped breathing, your heart tries to compensate for that lack of oxygen by pumping blood faster in order to get to the cells that need the oxygen, like in your brain. With sleep apnea, this can happen several times a night. Imagine switching a light bulb on and off several times, and then imagine what would happen to that light bulb over time,” says Reyes-Gelves, who often sees patients with sleep apnea with blood oxygenation levels that can drop down to the 70s (normal is 92 percent and above).

But once people realize that they have sleep apnea, there are several treatment options that can help them start breathing—and sleeping—better.

Reyes-Gelves first sends patients to the AU Sleep Center for a sleep study, which can be done at the center overnight or even at home—although staff can get more information from studies at the center.

Once sleep apnea is confirmed, there are several options. Losing weight and keeping it off can often cure weight-related sleep apnea. In fact, Reyes-Gelves always recommends a weight loss plan for patients who have sleep apnea and are overweight, even if the long-term plan is a sleep apnea surgery because of an anatomical issue. “That’s because we don’t want surgery to fail,” he says. “If you don’t lose weight and you have sleep apnea, even the best surgery cannot help you.”

CPAP—or continuous positive airway pressure—is a first-line, non-invasive way to treat sleep apnea, if patients are comfortable with sleeping with a CPAP device. This is the option many patients choose, which involves wearing a mask over the nose and/or mouth that blows air into the airway during sleep to help it stay open.

A simple mouthpiece that is worn while sleeping can also help. Some bring the jaw forward or hold the tongue in a different position, which can also open the airway.

There is also a surgical option: Head and neck surgery can repair anatomical issues that can lead to sleep apnea, anything from nasal airway abnormalities to enlarged tonsils/adenoids/tongue.

Reyes-Gelves is the first physician in the region to offer a new surgical treatment; hypoglossal nerve stimulation. Just like a pacemaker, the treatment inserts an implantable device just below the skin in the chest, which sends signals to the nerve that controls the tongue. When the device senses that the patient is having trouble breathing during sleep, it sends a gentle signal —so gentle that it doesn’t wake you up—to the tongue, nudging it forward and opening the airway.

Are You One of the 10 Percent?

The important thing, however, is getting treated. According to Reyes-Gelves, only about 10 percent of patients with sleep apnea get help.

Patients who do receive effective treatment sleep more soundly—and even better for their spouse or partner, usually stop snoring.

“A patient of mine—we did surgery on him to fix his anatomy and we were able to get him off everything,” said Reyes-Gelves. “And he stopped snoring, and his wife said, ‘I love you—he’s not snoring anymore.’ She was really more happy than he was treated.”

If you have trouble falling or staying asleep or experience problems with excessive daytime drowsiness, you may suffer from a sleep disorder. To make an appointment with our sleep experts, call 706-721-2273, email zzzz@augusta.edu or visit augustahealth.org/sleep