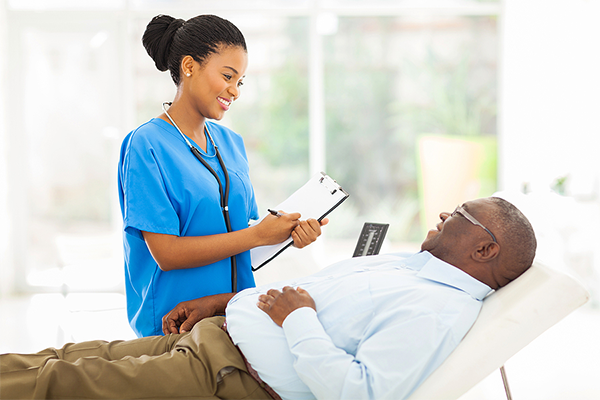 About 10% of strokes are caused by bleeding blood vessels in the brain. The remaining 90% are caused by blockages in the arteries of the brain. Depending on the part of the brain affected by a stroke, you might feel only a little numbness. Or, for a type of stroke in the basilar artery at the base of the skull, you could risk death and paralysis.

Going immediately to a hospital with a dedicated stroke center like Augusta University Health’s gives you the best chance of surviving.

Fast treatment also makes a huge difference in what life is like after a stroke.

How Fast Can You Get to the ER?

“The biggest problem that stroke patients have is not coming to the hospital in time,” says Giurgiutiu. “Any delay in care means it’s less likely patients can benefit from clot removal and recover better.”

For patients with severe blockages who don’t get to the hospital in time, on average, one in five, or 20% of patients will still go home after having a stroke. The remaining 80% will need rehabilitation. But that rehab will mostly like involve teaching someone how to transition from a wheelchair to a bed. “That group of patients is likely to be wheelchair-bound, unable to speak and able to understand only a few words,” said Giurgiutiu.

For people who have a stroke but get to a hospital right away and have their clot busted—either through the clot-busting drug tPA or procedural removal, also known as thrombectomy—three in five, or 60%, tend to go home from the hospital, either directly or after rehab. “Patients can move their arms but want to be able to play golf again. They can walk but want to be able to walk more quickly or run. Or they want to drive again,” said Giurgiutiu.

“When more of the brain is preserved, the rehab is different. People keep more of their independence and function.”

After a stroke, how well a person does the next day is one marker of how well he or she might recover. After a month of vigorous rehab—about three hours a day minimum—doctors check again, then at six months, and again at 12. Most of the recovery takes place by 12 months.

Having a goal in mind can encourage stroke patients while they’re going through the exercises of rehab. “Maybe that goal is going on a walk with their grandchildren or going fishing or going to church—I like to find steps they can achieve that are dear to them so they see how they’re improving,” said Giurgiutiu. “What do they enjoy? Some things are not going to come again, but others might.”

Recovery will have its ups and downs, both for the patient and the family. “It can be frustrating for the spouse or child or other caregiver, who’s not ready for the change in the relationship,” said Giurgiutiu. “If families are feeling discouraged, I encourage them to step back and acknowledge their frustration. It’s a common challenge, but just keep going week by week, and see where you are.”

Why Time is Brain

When someone has a stroke, depending on the stroke type, bleeding or a blockage keeps oxygen from getting to the brain. Brain cells start to die. So, the faster patients can get to the hospital to stop bleeding or to open up a blockage, the more brain cells survive.

Some patients may also have multiple small strokes over a longer period of time. The warning signs may be subtle—they may start to stutter or their hand might be more clumsy or they may stumble more. While the first or even the second stroke might not do much harm, over time and without treatment, patients develop what’s called vascular dementia.

“I tell patients to think of their normal brain as an office or a factory, and your brain cells are the workers,” said Giurgiutiu. “If you have 100 workers and you lose five, the 95 you have left should be fine to do the work. But if you keep losing workers, at some point, you won’t be able to cover the various jobs. In the same way, your brain is not going to work as well as it used to.”

Even after someone has a stroke—but especially before—people should work on controlling blood pressure, reducing cholesterol and blood sugar, exercising, and not smoking” said Giurgiutiu.

Being sick in your middle or old age isn’t neccesary, he added. “You can be healthier, longer.”

And again, after stroke, getting treated early does make the difference, emphasized Giurgiutiu. “Ideally, if you’re treated within a couple of hours of having a stroke, you’re much more likely to get your independence back.”