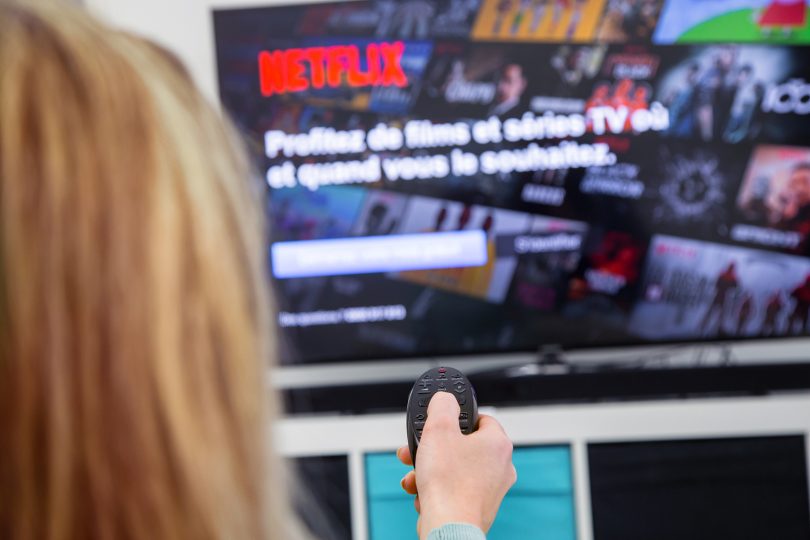 Thanks to DVRs and streaming services like Netflix, more of us are spending a lot more quality time—in front of our TVs.

According to a Netflix survey, 61 percent of its users will watch between two to six episodes in one sitting. Many are crushing an entire season in just one week—which averages out to more than two hours of TV every night.

Netflix even has a “Binge Scale,” a ranking of its most popular and binge worthy shows that keep our butts glued to the couch.

It’s a guilty pleasure—but how bad is binging on TV, anyway?

Ask yourself, “Am I watching too much TV?”

Let’s face it, if you’re truly binge watching, two episodes is strictly minor league. A Deloitte survey found that respondents ages 14 to 33 admitted to binge watching an average of five episodes in just one sitting. For others, it’s a point of pride to take in an entire season all at one time.

But while you might laugh, love and be riveted along with your favorite characters, once you turn the TV off, there’s another not-so-fun emotion that’s common among binge-watchers. “People often report increased regret with binge watching relative to regular TV watching,” said Dr. Dale Peeples, a psychologist with Augusta University Health. “They describe a sense of feeling like they wasted time and that a TV series was pulling them away from other interests they used to engage in.”

Part of that regret stems from how streaming services typically will cue up the next episode automatically. “It’s easy to roll with it and keep going,” said Peeples. “Then time’s gone by and you spent more time watching TV than you intended to. You probably wouldn’t see that sense of regret and wasted time if you had purposely chosen to engage in it.”

Along with that regret often comes higher levels of loneliness, anxiety and depression, say experts. That’s even though binge watching is often driven by the desire to stay current on popular shows so that you can discuss them with friends—and even if you watch with a partner.

No surprise here—when you sit for long periods of time, typically noshing on chips and other salty or sweet snacks—you’re not doing a lot of good for your body.

But it’s not just that drop in metabolism or increased risk for gaining weight that you have to worry about. In 2015, the American Journal of Preventive Medicine published a long-term study that examined binge watching over a 14-year span. It found that people who binged on TV for three or four hours a day had a 15 percent higher risk of dying from cancer. And those who watched seven or more hours a day were 47 percent more likely to have died during the course of the study.

“TV viewing is the most common sedentary behavior U.S. adults engage in,” said Peeples. “And the more time you spend sitting, the greater the impact on your metabolism. So obesity—and health effects related to that—tend to be very strongly correlated to the amount of time people watch TV.”

Is sleep your greatest enemy?

“Sleep is my greatest enemy” and “Sleep watching: the final frontier” are just a few of the provocative tweets that Netflix has posted to encourage viewers to just keep on watching. While they’re meant to be fun, the truth is that binge watching really can affect sleep.

It’s more than just staying up late watching. Once you do turn off the TV, you might find that you can’t turn your mind off so easily. “With binge watching, you’re invested in the plot and the characters. The show has latched you in. People have a harder time turning that off and getting to sleep,” said Peeples.

No one’s saying to get rid of your TV. The point is, just be a little more mindful and active about the decision to keep watching, said Peeples, and set some limits. Notice too if you’re bored or don’t have good social outlets, and just tend to veg out, night after night. “Don’t rely on the technology to make the choice for you, whether you watch or not,” he said.

According to the latest data, the average amount of TV an American adult watches every day is more than five hours. That means some of us are watching an insane amount of TV, but most of us are probably watching a little more than what’s good for us.

“Binge watching one night a week to catch up on a favorite show isn’t the problem. It’s when binge watching is happening most nights, to the exclusion of our family, friends, activities or other interests,” said Peeples. “So think about it: What did you used to do before TV became so central? That’s a great place to begin to make a change.”

Curious about how your TV habits are affecting your health?

For more information about behavioral health or to schedule an appointment with someone who can help, call 706-721-6597, or visit augustahealth.org/behavioral-health. However, if you or someone you love is suffering a mental health emergency and may be a threat to themselves or others, please call 911 immediately.

To find a primary care physician or schedule an appointment at Augusta University Health, visit augustahealth.org, or call 706-721-2273 (CARE).