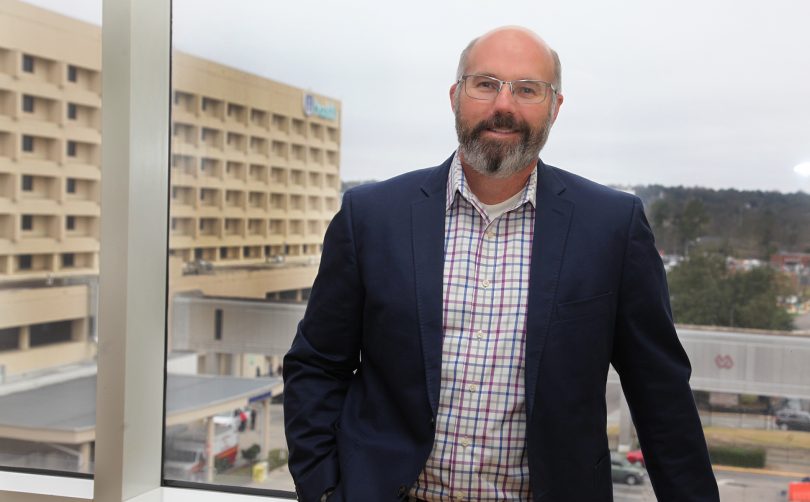 Every year, a half-million new cases of Alzheimer’s disease are diagnosed in the United States. Nearly six million people are living with Alzheimer’s right now; by 2050, that number is expected to more than double to nearly 14 million.

Alzheimer’s and other dementias also kill 1 in 3 seniors—more than breast cancer and prostate cancer combined.

Even with all of that, it’s estimated that only 16% of seniors get cognitive assessments during their routine health checkups.

The building on Harper Street may be small, but it’s where some of the state’s most exciting work in Alzheimer’s disease is being conducted.

Over the past several years, Morgan has invited Emory University Alzheimer’s specialists Dr. Allan Levey and Dr. James Lah as keynote speakers for Augusta University’s Alzheimer’s Disease/Parkinson’s Disease Symposium. While there, Levey and Lah discussed their work with the state of Georgia to help primary care physicians better identify patients with memory disorders and send them to a memory center for evaluation sooner.

Morgan was very interested in having the program at AU Health become a memory center. Even though early diagnosis and treatment doesn’t definitively slow down Alzheimer’s progression, it can help both patients and families cope better. “And the goal in the long run is to get patients enrolled in early interventions as they become available, which could help them remain at home and reduce costs of long-term care or nursing home placement,” said Morgan.

Through the program, Morgan was able to enhance Alzheimer’s care in this area by adding a dedicated social worker, Dana Daniel, along with a MAC coordinator, Kristine Cordero, and scribe Alejandro Jimenez. Also part of the team are Kathy Tuckey, formerly of the Alzheimer’s Association of Augusta, who has been “transformative for our program,” said Morgan, serving as a coordinator for most of its existence; psychometrist Adrienne Wilson, with more than 30 years’ experience

in cognitive testing for patients with Alzheimer’s and other dementias; and physician assistants Elizabeth Prince-Coleman and Crystal Stephens. Morgan also plans to soon add geriatric psychiatrists to the clinic.

When it comes to patients, this is a common story: A family brings in their parent. They say, “Mom’s memory has just been slipping for the past year.” But then Morgan starts asking questions like, “Is she still driving?” And the answer comes back: “No, she hasn’t driven for two years; she kept getting lost.”

“That’s when families realize, ‘Oh, it’s really been much longer.’ And they start sharing that mom repeats the same questions over and over again, or often misplaces objects and can’t remember how they got there when she finds them. Then their loved one scores a 10 out of 30 on a cognitive test. All of that is what we’re hoping to change through the MACs,” said Morgan.

“Senior” moments are a real thing—for any of us, at any age, especially if we get busy. So while misplacing keys or forgetting a name may not be a big deal, “here’s a rule of thumb that’s usually true, especially for younger individuals,” said Morgan. “If you’re aware of your memory troubles, you’re probably doing OK. Patients with Alzheimer’s are often very unaware that they’re having a problem.”

If there is a problem, seeing a primary care doctor and getting a referral to a neurologist early on means that families can benefit from a wide variety of resources available, from tools and techniques to help loved ones with day-to-day tasks to support for caregivers—all focused on keeping life with Alzheimer’s as good as possible, for as long as possible.

Seeing a doctor early can also be life-changing, say if a patient’s memory problems are related to something else that’s completely treatable. Depression, anxiety, certain medications or other disease could be to blame—“and if we can treat them, these patients can get their lives back,” said Morgan.

While there are no medications right now that can slow down Alzheimer’s, Morgan sees that changing in the next few years. It’s why he’s also so passionate about offering clinical trials at the Alzheimer’s program at AU—one of only a handful of programs in the state making those available. He’s also envisioning his center becoming a part of the Alzheimer’s Disease Genetic Consortium to further genetic research, and possibly other research consortia to continue to develop research at the center. All of that requires federal and state support and philanthropic support too to help ensure the program can continue to grow and offer the latest therapies for patients with Alzheimer’s in Georgia and the region.

“Treating Alzheimer’s is both rewarding and tough,” Morgan said. “It’s tough when you’ve got a patient coming in for the first time with significant dementia because the disease has progressed so far along. But it’s rewarding in that I think we’ll be on the forefront over the next 10 years of disease-modifying therapies as they are first introduced, so I’m anticipating that reward.”

Want to stay mentally sharp? Stay physically active, be engaged in social activities, and develop a hobby. For more on what you can do or to schedule an evaluation with one of our Alzheimer’s specialists, call the Augusta University Memory Disorders Clinic at 800-736-CARE (2273) or schedule an appointment online at https://www.augustahealth.org/make-an-appointment.

Want to say thank you to an extraordinary nurse or