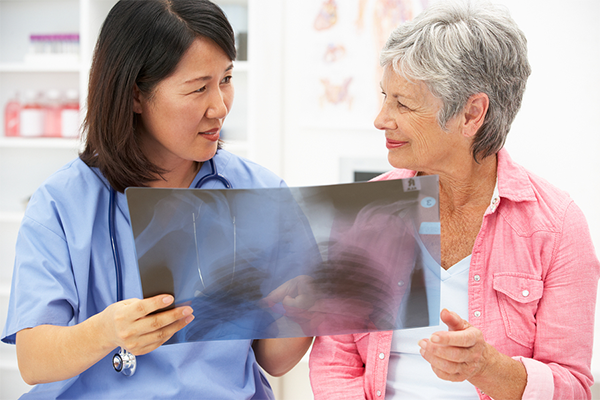 “It starts with a dry, hacking cough that just doesn’t stop and seems to suck the life out of me.”

That’s what Dr. Varsha Taskar, a pulmonologist at Augusta University Health, was told by one of her patients.

With other symptoms, like shortness of breath, feeling tired, losing weight for no reason, achy muscles and joints, and widening and rounding of the tips of the fingers or toes, it could all point to pulmonary fibrosis.

“Pulmonary fibrosis is a chronic lung disease where there is development of scar tissue in the lungs,” said Dr. Taskar. “The difficulty is understanding what kind of fibrosis it is because different types need very different treatments.”

A Journey
PF isn’t common in the general population, but is more common if:
• You are or were a smoker.
• You worked in an occupation that exposed you to high levels of dust and fibers.
• You received radiation to treat breast or lung cancer.
• You took certain medications, like chemotherapy drugs, certain heart medications, some antibiotics and some anti-inflammatory drugs that can cause lung damage.
• You have certain medical conditions like scleroderma, rheumatoid arthritis, lupus and other connective tissue diseases.

It also is usually diagnosed in people when they are 65 or older, sometimes years after they were initially exposed to the conditions leading to PF.

For some, it is a journey to find the diagnosis and relief. Others may fortunately be without any symptoms but are diagnosed on a routine chest X-ray or CAT scan.

A definitive diagnosis is often established by a group of doctors, including the radiologist, pathologist, pulmonologist, rheumatologist and surgeon, called a “multidisciplinary ILD team” (ILD stands for interstitial lung diseases).

A Serious Diagnosis
PF is a serious diagnosis, because unlike other lung conditions like chronic obstructive pulmonary disorder (COPD), there aren’t good treatments. “It is relentlessly progressive so finding it sooner helps us diagnose it accurately,” said Dr. Taskar. “How progressive is it? Each person is different, but sadly, there can be 50% mortality in five years. At the same time, we have patients who have lived seven or eight years after being diagnosed and have a fairly preserved quality of life.”

Early diagnosis is important, and having access to the multidisciplinary team improves the accuracy of the diagnosis. This team can look at the case together and determine what treatments are suitable for a specific patient.

There are a couple of anti-fibrotic medications that slow down scarring in a specific group of patients. These medications are expensive and do have side effects. Whether and when to start a patient on these medications therefore is a balancing act better handled by a team of physicians.

Inhalers and medications to suppress cough, immunosuppressive and anti- inflammatory medications such as steroids may have a limited role as well. Pulmonary rehab is recommended to keep muscle strength and performance of daily activities as lungs get weaker.

Oxygen Is Like Another Medication
Most patients with PF will need oxygen at some point. And that’s not a bad thing.

“Oxygen is sometimes regarded in the public as something negative,” said Dr. Taskar. People might be embarrassed to bring an oxygen tank with them in public, or they don’t want to be pitied or thought that they are “terminal or advanced.” “But if a patient doesn’t use the oxygen when it’s recommended and when they need it, it could cause damage to the heart from lack of oxygen, which leads to pulmonary hypertension and other complications. So oxygen needs to be treated like medicine. If you need it, use it.”

Life After PF
Quitting smoking and eating a healthy diet are important as with any chronic lung disease. But most important of all is keeping in touch with family and friends. Augusta University Health also offers a Pulmonary Fibrosis Support Group that meets every three months (its next meeting is September 27 from 2:30 to 4:30 p.m. in BT 1810 on the first floor of the Children’s Hospital of Georgia).

“There’s definitely going to be anxiety involved about what’s to come,” said Dr. Taskar. “It can be very depressing.” The Pulmonary Fibrosis Foundation (www.pff.org) has a number of resources for patients and family members to ease their journey through this.

There’s value too in getting familiar with concepts like home health, which can offer help at home and physical therapy; palliative care, which increases that level of support with a social worker and even pastoral support; and finally hospice care, which focuses on comfort.

“A patient of mine was diagnosed with PF at a time in his life when he was at the top of his profession. It was devastating, but he took it in his stride, got on medications and hoped they would prolong his life, which they may have. He continued working for another couple of years and then had to slow down and finally quit working. It was hard letting go, but when he came to terms with his diagnosis, he reflected. I’ll always remember what he said: ‘Had I been in a motor vehicle accident or had a heart attack or stroke, that would have been the end. But in a negative/positive way, PF gave me time to process through these changes and prepare myself and my family for what lay beyond.’

“So while no one wants to be diagnosed with any progressive disease, by taking a positive attitude, you can focus on the things that are important to you and make these some of the most precious times of your life.”